The Age of Surveillance Capitalism

- The Fight for a Human Future at the New Frontier of Power: Barack Obama's Books of 2019 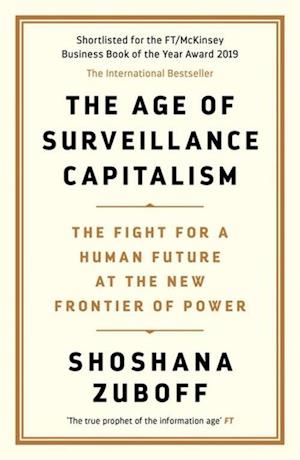 Forfatter
Forlagets beskrivelse THE TOP 10 SUNDAY TIMES BESTSELLER A NEW YORK TIMES NOTABLE BOOK OF THE YEARONE OF BARACK OBAMA'S TOP BOOKS OF THE YEARShortlisted for The Orwell Prize 2020Shortlisted for the FT Business Book of the Year Award 2019 'Easily the most important book to be published this century. I find it hard to take any young activist seriously who hasn't at least familarised themselves with Zuboff's central ideas.' - Zadie Smith, The GuardianThe challenges to humanity posed by the digital future, the first detailed examination of the unprecedented form of power called "surveillance capitalism," and the quest by powerful corporations to predict and control us.The heady optimism of the Internet's early days is gone. Technologies that were meant to liberate us have deepened inequality and stoked divisions. Tech companies gather our information online and sell it to the highest bidder, whether government or retailer. Profits now depend not only on predicting our behaviour but modifying it too. How will this fusion of capitalism and the digital shape our values and define our future?Shoshana Zuboff shows that we are at a crossroads. We still have the power to decide what kind of world we want to live in, and what we decide now will shape the rest of the century. Our choices: allow technology to enrich the few and impoverish the many, or harness it and distribute its benefits. The Age of Surveillance Capitalism is a deeply-reasoned examination of the threat of unprecedented power free from democratic oversight. As it explores this new capitalism's impact on society, politics, business, and technology, it exposes the struggles that will decide both the next chapter of capitalism and the meaning of information civilization. Most critically, it shows how we can protect ourselves and our communities and ensure we are the masters of the digital rather than its slaves.
Bibliotekernes beskrivelse Surveillance Capitalism: A new phase in economic history in which private companies and governments track your every move with the goal of predicting and controlling your behaviour. Under surveillance capitalism you are not the customer or even the product: you are the raw material.