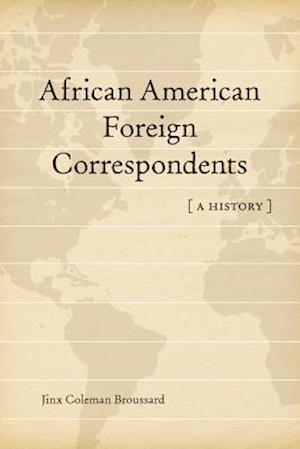 Though African Americans have served as foreign reporters for almost two centuries, their work remains virtually unstudied. In this seminal volume, Jinx Coleman Broussard traces the history of black participation in international newsgathering. Beginning in the mid-1800s with Frederick Douglass and Mary Ann Shadd Cary--the first black woman to edit a North American newspaper--African American Foreign Correspondents highlights the remarkable individuals and publications that brought an often-overlooked black perspective to world reporting. Broussard focuses on correspondents from 1840 to modern day, including reporters such as William Worthy Jr., who helped transform the role of modern foreign correspondence by gaining the right for journalists to report from anywhere in the world unimpeded; Leon Dash, a professor of journalism and African American studies at the University of Illinois at Urbana-Champaign who reported from Africa for the Washington Post in the 1970s and 1980s; and Howard French, a professor in Columbia University's journalism school and a globetrotting foreign correspondent.

African American Foreign Correspondents provides insight into how and why African Americans reported the experiences of blacks worldwide. In many ways, black correspondents upheld a tradition of filing objective stories on world events, yet some African American journalists in the mainstream media, like their predecessors in the black press, had a different mission and perspective. They adhered primarily to a civil rights agenda, grounded in advocacy, protest, and pride. Accordingly, some of these correspondents--not all of them professional journalists--worked to spur social reform in the United States and force policy changes that would eliminate oppression globally. Giving visibility and voice to the marginalized, correspondents championed an image of people of color that combatted the negative and racially construed stereotypes common in the American media.

By examining how and why blacks reported information and perspectives from abroad, African American Foreign Correspondents contributes to a broader conversation about navigating racial, societal, and global problems, some of which we continue to contend with today.