A Treatise on the Decorative Part of Civil Architecture

- With Illustrations, Notes, and an Examination of Grecian Architecture (Volume 1) 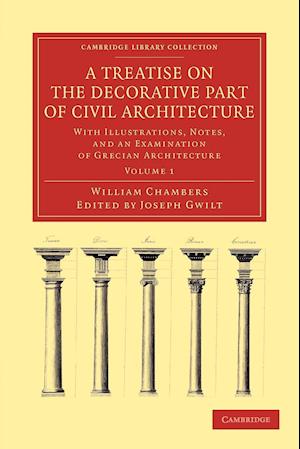 Sir William Chambers (1722-96), architect and furniture designer, wished to further his career in the 1750s by publishing on architecture. He also became the Prince of Wales' architectural tutor, architect to the office of works, then head of the royal works (comptroller and surveyor-general from 1782). Notably, he remodelled Buckingham House (1762-73) and designed Somerset House (1775-96), but Chambers' reputation rests also on his Treatise on Civil Architecture (1759), which he revised and expanded in 1791 as A Treatise on the Decorative Part of Civil Architecture. It is regarded as one of the standard English texts on classical architecture, and remains essential reading. This reissue is of the two-volume edition of 1825, annotated by the architect and writer Joseph Gwilt (1784-1863). Volume 1 contains Gwilt's prefatory material, including an analysis of Grecian architecture's development, followed by Chambers' systematic treatment of the orders of architecture.