A Naturalist in the Amazon 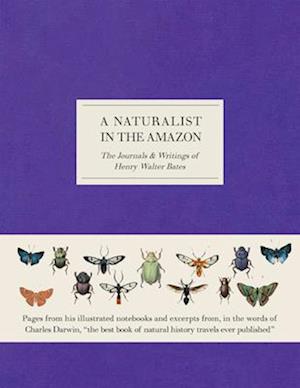 Beauitfully presented facsimile reproductions of the drawings and notes of pioneering entomologist Henry Walter Bates documenting his 11-year-long travels in the Amazon in the mid-1850s. This charming book showcases the two journals produced by entomologist Henry Walter Bates during his groundbreaking travels and discoveries in the Amazon from 1848 to 1859, on which his classic work The Naturalist on the River Amazon, was based. It includes facsimile reproductions of stunning illustrated pages taken from his Amazon journals, as well as an essay describing his travels. The journals reveal how a self-taught naturalist and butterfly enthusiast had a profound impact on the science of evolution. Bates, a trusted companion of Alfred Russel Wallace, traveled with him to the Amazon in 1848. There he became fascinated by close similarities in appearance between unrelated butterflies, and discovered a scientific phenomenon we now refer to as Batesian mimicry: species that are highly desirable to predators began evolving to look more like other, more toxic species in order to avoid predation. Bates spent a total of 11 years in the Amazon; when he returned to England, he had collected, by his own estimate, some 14,000 species of insects, of which no less than 8,000 were previously unknown. This beautiful book offers valuable new insight into the scientific implications and findings of Henry Walter Bates's rich and fruitful time in the Amazon, and it is the ideal book for anyone interested in science, scientific history, and science illustrations.