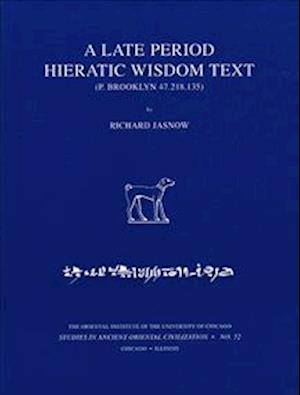 This volume contains an edition of P. Brooklyn 47.218.135, a papyrus dated to the fifth or fourth century b.c. in the collection of the Brooklyn Museum. Despite the relatively poor state of preservation, the papyrus contains a wisdom text of considerable interest, as it is one of the few literary works written in the hieratic script known from the Late period. It displays similarities with both the earlier pharaonic and the later Demotic compositions. Classicists and biblical scholars will certainly also wish to consider possible connections with Hellenistic and biblical wisdom traditions. The volume contains a hieroglyphic transcription, consecutive translation, philological commentary, glossary, bibliography, plates, and a discussion by the author of the script, grammar, content, and significance of the text.