You Me At Six

- Never Hold An Underdog Down 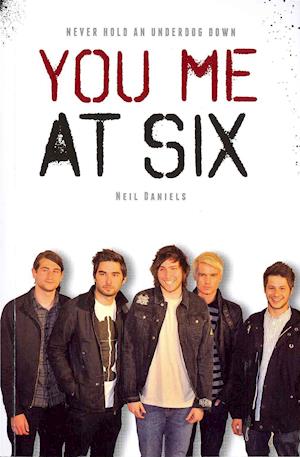 Since forming in Surrey in 2004, You Me At Six have become one of the most revered and popular alternative rock bsnds of their generation, with three influential and critically acclaimed albums to their name. For three years' running Kerrang! has nominated them for 'Best British Band' and says that they are 'one of a kind' (they finally won the coveted title in 2011). This book examines what makes this scintillating rock band tick and why they have become such an iconic act in a relatively short period of time. Their strict work ethic and innovative nature has gained them a loyal fanbase that goes beyond the word "cult." Having toured extensively around Europe and also in North America, You Me At Six are also one of alternative rock's most exhilarating live bands. At a time when many Britsh rock fans are looking to the United States for inventive alternative rock, You Me At Six prove that there is still a rich seam of home-grown talent.

Forfattere
Bibliotekernes beskrivelse This biography charts the rise of the Surrey band; the stories behind the making of their albums; their energetic stage performances and their influences... ill