You are the Ref 3

- Over 250 New Footballing Dilemmas. Only One Answer. Do You Know the Score? (Book 3) 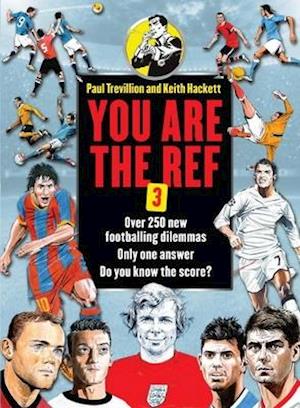 Think you know the beautiful game?What would YOU do if you were the man in black?1) A keeper jumps to punch a corner clear, but fluffs it completely, knocking the ball into his own net. He screams that a laser was shone into his eyes - and as you look round you do see a laser pen in the crowd. What now?2) A striker has his shirt repeatedly pulled by his marker. Angrily, he takes his shirt off and sarcastically hands it to his opponent. What do you do? 3) In the half-time break after a stormy first forty-five minutes, your assistant calls you over and points out that the home side's star striker has been using the interval to tweet offensive remarks about you. How do you react?Legendary Roy of the Rovers artist Paul Trevillion here presents 160 tricky new footballing dilemmas from his cult classic strip. Pit your wits against the distinguished referee Keith Hackett in his toughest scenarios yet.Interspersed with a wealth of facts and stats about the 'World Cup titans', and giving an insight into the sometimes bizarre and unpredictable challenges a referee can face, this book puts YOU in the hot seat.