Yiddish and the Left

- Papers of the Third Mendel Friedman International Conference on Yiddish 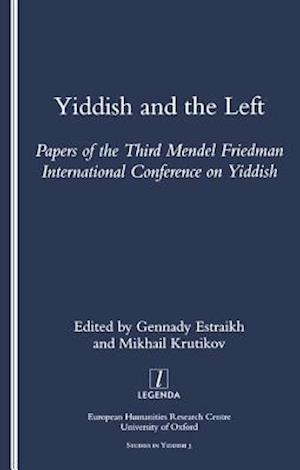 For over a century Yiddish served as a major vehicle for expressing left-wing ideas and sensitivities. A language without country, an "ugly jargon" despised by assimilationist Jewish bourgeoisie and nationalist Zionists alike, it was embraced as genuine folk idiom by Jewish adherents of socialism and communism worldwide. Following the Holocaust, Yiddish was the primary language of education, culture and propaganda for millions of people on five continents. This volume examines the diversity of relationships between Yiddish and the Left, from the attitude of Yiddish writers to apartheid in South Africa to the vicissitudes of the Yiddish communist press in the Soviet Union and the USA.

Forfattere
Bibliotekernes beskrivelse This is a selection of papers from the third Mendel Friedman International Conference on Yiddish, exploring the relationship between the Yiddish language and Leftist movements such as communism and socialism.