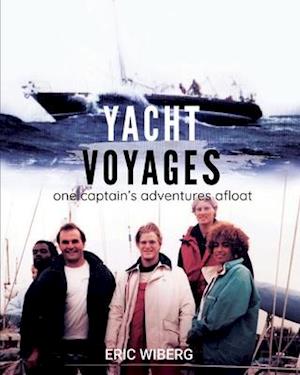 This is all the saga of global yacht delivery crew who are the unsung glue who fill in the gap by manning and moving those boats smaller than the mega-yachts and bigger than those which the owners sail themselves. A nautical memoir about a young sailor rising through the ranks aboard over 125 privately owned sailing yachts and power boats 25 to 70 feet long. The stories start with him being tossed around in a tiny boat in the Baltic, then gaining a foothold as a boat-boy for a prominent Brahmin family, racing to Bermuda. This led to his assuming command over a 68-foot wooden yacht across the Pacific. Accounts include being knocked overboard in a snowstorm, the burning and sinking of a classic 1937-built yacht off Trinidad (which led to a seminal maritime law case), trans-Atlantic voyages with a drunk, a playboy, a former CIA agent partially blind and nudist, a captain whose water jug, turned out to contain vodka, and a convicted drug smuggler and addict who assaulted him with a knife - twice. On top of these were several shark attacks, mutinous behavior not just by the crew, but when the author was forced by necessity to become crew for other captains again.

Humorous episodes include developing a knack for having huge ships alter course for tiny yachts, grabbing crew out of sundry bars to avoid hurricanes, or leaving undesirables ashore. The nomadic life led to fast-paced romances in foreign ports. After a voyage from the US to the UK, the burly Australian skipper forced the young yacht owner to drive in a red Ferrari to London banks until the crew were paid.