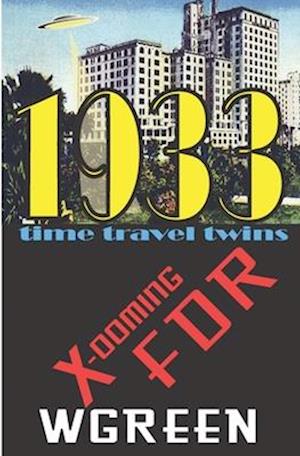 Time travelers, Ethan Callan-Wright and Zak Newman are back from their flight to 1932, but they don't have Emma with them. Dangerously ill, Ethan's twin sister was left behind. Now the duo has landed in an unknown time and place. Their first task is to survive brutal winter weather conditions. Next, they must find a way to return home. It's a long and dangerous trek. But they get help from a new friend, and they find out some surprising information about their world of 2032. Things are worse than they believed. Not only is MOM continuously spying on them, but she is also working to destroy the country. Back safely in their hometown of Mystic Heights, they plan their return to the era of gang violence, prohibition and the Great Depression. With A.C. Currant breaking the trail, Ethan and Zak arrive in early February, 1933 America intending to bring back Emma. Equally important, they also plan to save Franklin D. Roosevelt from an assassin's bullet. Riding first class trains down the coast, they travel to Washington D.C.; and then push off to Miami in Jack Travers' 1930 Buick roadster. When they arrive in sunny Florida, they must unravel and stop an assassination plot involving Chicago mobsters, a beautiful woman, and other unknown, but extremely powerful forces. On the night of February 15, 1933, in Miami's Bayfront Park, shots are fired by a crazed assassin, Giuseppe Zangara, an Italian immigrant who suffers from a bad belly and a compulsion to kill kings and presidents. The time travelers must save Franklin D. Roosevelt to allow him to become president and change the future of the United States of America. This book is for adults and young adults, but not children.