Writing History in the Community of St Cuthbert, C.700-1130: From Bede to Symeon of Durham

- From Bede to Symeon of Durham

indgår i serie Writing History in the Middle Ages 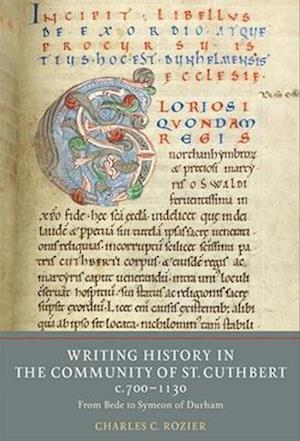 Historical texts of all kinds were written in the community of St Cuthbert c.700-1130, from short annals to extended narrative history, political tracts and works on the lives and miracles of saints.At the same time, scribes in the community worked to copy and procure notable classics of historiography, from Classical Antiquity down to the Norman Conquest of England. But what did these various forms of writing about past events mean to their original authors and readers? What were these texts for?

This book offers a narrative of historiographical production within St Cuthbert's community from the time of its foundation on the island of Lindisfarne, through subsequent translations to Chester-le-Street and Durham, down to the vibrant intellectual revival of the Anglo-Norman period. Focusing on several watershed moments in the story of this community, it identifies political, religious, intellectual and cultural triggers for historical writing, and argues that knowledge of past events gave successive guardians of Cuthbert's cult their single most valuable tool in the continuous effort to define who they were, where they had come from, and what they hoped to continue to be.

Forfattere
Bibliotekernes beskrivelse An examination of the extraordinary texts produced by the community of St Cuthbert, showing how they were used to construct and define an identity.