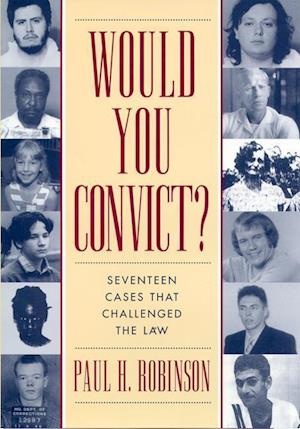 An illuminating exercise that challenges the reader's beliefs about the justice systemA police trooper inspects a car during a routine traffic stop and finds a vast cache of weapons, complete with automatic rifles, thousands of rounds of ammunition, and black ski masks-a veritable bank robber's kit. Should the men in the car be charged? If so, with what? A son neglects to care for his elderly mother, whose emaciated form is discovered shortly before she dies a painful death. Is the son's neglect punishable, and if so how? A career con man writes one bad check too many and is sentenced to life in prison-for a check in the amount of $129.75. Is this just? A thief steals a backpack, only to find it contains a terrorist bomb. He alerts the police and saves lives, transforming himself from petty criminal to national hero. These are just a few of the many provocative cases that Paul Robinson presents and unravels in Would You Convict? Judging crimes and meting out punishment has long been an informal national pasttime. High-profile crimes or particularly brutal ones invariably prompt endless debate, in newspapers, on television, in coffee shops, and on front porches. Our very nature inclines us to be armchair judges, freely waving our metaphorical gavels and opining as to the innocence or guilt-and suitable punishment-of alleged criminals. Confronting this impulse, Paul Robinson here presents a series of unusual episodes that not only challenged the law, but that defy a facile or knee-jerk verdict. Narrating the facts in compelling, but detached detail, Robinson invites readers to sentence the transgressor (or not), before revealing the final outcome of the case. The cases described in Would You Convict? engage, shock, even repel. Without a doubt, they will challenge you and your belief system. And the way in which juries and judges have resolved them will almost certainly surprise you.