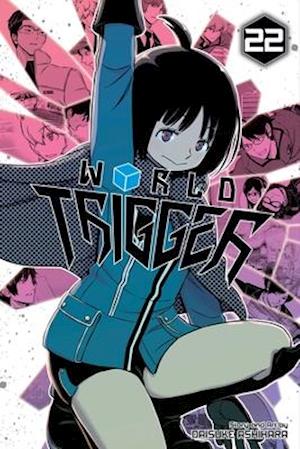 You thought your neighbors were bad...but at least they're not aliens trying to kill you!Earth is under constant threat from Neighbors, invincible monsters from another dimension that destroy our way of life. At least we have the elite warriors of Border, who co-opt alien technology to fight back! Meet agent Osamu Mikumo, not the best, but along with his Neighbor friend Yuma, he'll do whatever it takes to defend life on Earth as we know it.It's round 8 of the Rank Wars, and Hyuse is heavily damaged and flanked by rival squads. The whole match hinges on two things: Chika's ability to shoot people and the squad's overall strategy against Ninomiya himself. Tamakoma-2's ticket to the away mission depends on placing high in B-rank, and the final match is hurtling towards a conclusion!

Forfattere
Bibliotekernes beskrivelse You thought your neighbors were bad...but at least they're not aliens trying to kill you!