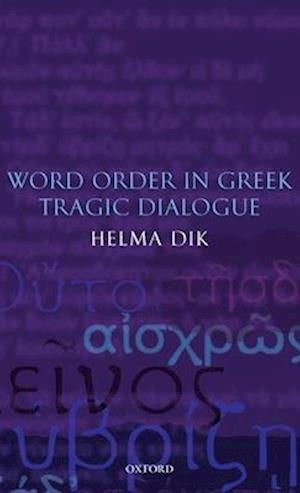 Helma Dik approaches word order in Greek tragic dialogue from the perspective of language rather than metre. The tragic poets engaged in mimesis of natural dialogue; therefore the analysis of the linguistic characteristics of the dialogue precedes exploration of the metrical dimension, on the assumption that poets would not be overly constrained by the iambic trimeter, which, after all, was the most natural speaking verse according to Aristotle. Dik analyses the wordorder of tragic dialogue in pragmatic terms, arguing that, in sentences, words functioning as Topic (the 'starting point' of an utterance) or Focus (the most salient piece of information) will come early, and that other less important words will follow. Similarly, the position of adjectives withinnoun phrases is analysed as a function of their relative salience rather than in terms of their semantics. This approach aims to account for word order in sentences generally, but it also allows for a new interpretation of familiar phenomena in Greek, such as 'postponed interrogatives'. The book concludes with a commentary on the word order in four passages of Sophocles' Electra.

Forfattere
Bibliotekernes beskrivelse A study of dialogue in Greek tragedy not as poetry in the first instance but as dialogue between the characters on stage. Which words do they highlight? What is the effect of this highlighting? The various chapters focus on sets of sentences that have similar meanings but different word order, so that the effects of word order can be teased out. 6 tables