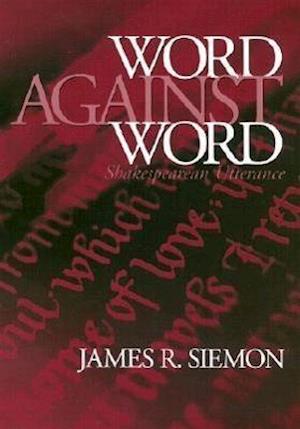 This volume offers a new approach to Shakespearean drama and, in particular, to Shakespeare's ""Richard II"", through an extended engagment with the Bakhtinian concept of art as a form of social utterance. The book explores this central Bakhtinian conception and its associated notions of social accent, dialogism and heteroglossia in the context of dama and of Shakespeare studies. The author begins by examining the variety of accents, discourses and behaviours that competed for the social space of early modern England. He surveys Shakespeare and his contemporaries, including dramatists, poets and other writers, in order to document early modern attitudes toward the implications of sociolinguistic behviour in a heteroglot environment. While ranging broadly, the book takes ""Richard II"" as an exemplary instance of Bakhtinian utterance, showing the play to be, despite its apparent thematic and formal unities, an arena marked by struggles among competing groups and orientations, with their socially defined languages and assumptions. The figure of Shakespeare's King Richard emerges as a revealing example of a form of subjectivity constructed amid the demands of conflicting voices. Taking his lead from V.N. Volosinov's stress on the social implications of formal elements of utterance, Siemon argues for the utility of formal analysis in historical and new historical stud. To this end, he reconsiders the social implications of such features as tonality, diction, timing, gesture and metaphor. His analysis extends not only to ""Richard II"" but also to the materials on which historians and new historians have based arguments about the socio-political locations of the theatre, the role of honour culture, the rise of agrarian enclosure and the cultural polarization of English society.

Forfatter
Bibliotekernes beskrivelse Applies the work of M.M. Bakhtin and his circle to the study of Shakespearean drama and, in particular, to Shakespeare's ""Richard II"". The book explores this central Bakhtinian conception and its associated notions of social accent, dialogism and heteroglossia.