Women of Quality - Accepting and Contesting Ideals of Femininity in England, 1690-1760

- Accepting and Contesting Ideals of Femininity in England, 1690-1760 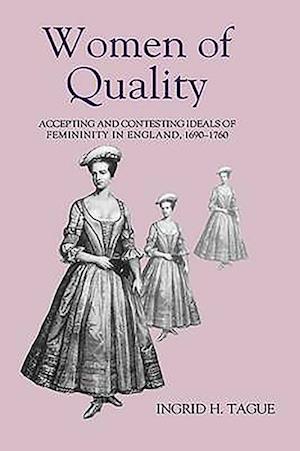 Focusing on the complex relationship between discourse and experience, Women of Quality examines the role of gender in aristocratic women's daily lives during a period of significant cultural change. In the years following the Glorious Revolution, didactic writers and other social critics responded to a perceived crisis of gender relations by creating a new discourse of 'natural' feminine behavior in opposition to the luxury and decadence of fashionable women. Modern scholars have often portrayed this agenda as representing the rise of a middle-class ideology, but Ingrid Tague argues that the new rhetoric held enormous appeal for those women who would appear to be its greatest targets: wealthy, fashionable 'women of quality'. Using the correspondence and diaries of these women, Tague traces the ways in which they adopted, adapted, and exploited ideals of femininity. In their hands, feminine values could become powerful tools that enabled them to compete for status and reputation. Ironically, by identifying femininity with private, trivial concerns, these ideals created unique opportunities for elite women. Female participation in informal social and political activities placed women at the heart of aristocratic power in the early eighteenth century, even as they employed the language of wifely subordination and domesticity. Ingrid Tague is Assistant Professor of History at the University of Denver.

Forfattere
Bibliotekernes beskrivelse An examination of the interaction between ideology and experience in the lives of English women during a period of great social and intellectual change.