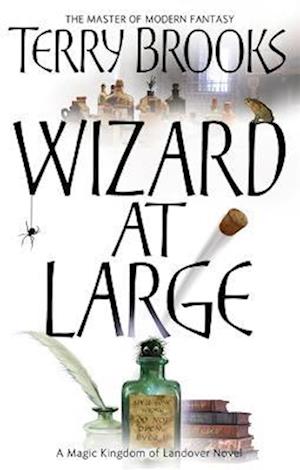 ***50 MILLION TERRY BROOKS COPIES SOLD AROUND THE WORLD***'Terry's place is at the head of the fantasy world' Philip PullmanBen Holiday, the High Lord of Landover, is back in his rightful place. The evil wizard Meeks has finally been dealt with, and all seems well with the world. But, even in a Magic Kingdom, peace never lasts long.It was all Questor Thews' fault, really - whether the inept Court Wizard would like to admit it or not. His bumbling attempt to return Abernathy from the body of a dog to his original human form, resulted in the Court Scribe being transported to Earth, to be replaced by a multi-coloured bottle. Furthermore, Abernathy was wearing the High Lord's medallion at the time, without which Ben's powers are drastically reduced.Ben and Willow set out to find Abernathy, which means following him to Earth. Which means leaving Questor in charge. And that's when things start to go horribly wrong. . .Praise for Terry Brooks:'A master of the craft . . . required reading' Brent Weeks'I can't even begin to count how many of Terry Brooks's books I've read (and re-read) over the years' Patrick Rothfuss, author of The Name of the Wind'I would not be writing epic fantasy today if not for Shannara' Peter V. Brett, author of The Painted Man'If you haven't read Terry Brooks, you haven't read fantasy' Christopher Paolini, author of Eragon