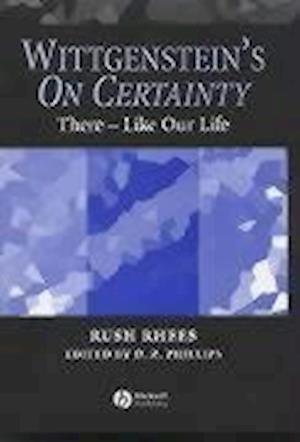 Even Wittgenstein's admirers have been puzzled by his last work, On Certainty. Some even regard it as a lapse at the end of a distinguished career, or as a late epistemological interest that remained undeveloped. Rush Rhees, a close friend of Wittgenstein and a major interpreter of his work, shows how Wittgenstein's On Certainty concerns logic, language and reality - topics that occupied Wittgenstein from early in his career. From his earliest work on the nature of propositions, to his interest in On Certainty with the 'sureness' in our language-games, Wittgenstein questions 'what it means to say something'. He emphasizes the importance not of that which cannot be questioned, but of what we do not question in our thought and action. In this book, Rhees brings out the continuity in Wittgenstein's thought, and the radical character of his conclusions. In explicating this text, and demonstrating its continuity with Wittgenstein's earlier work, Rhees has done a great service that will be of profound interest to students and scholars of Wittgenstein for generations to come. Rhees's comments are introduced by D. Z.Phillips, who writes a substantial and illuminating afterword that discusses current scholarship surrounding On Certainty, and its relationship to Rhees's work on this subject.