Wish Upon a Duke 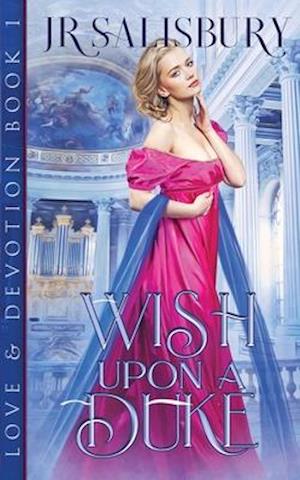 When Savannah Dawson married the second son of an English earl, she never dreamed she'd have to leave her beloved America, let alone enter the aristocracy at her son's side. Yet when the earl dies and her husband disappears at sea, Savannah's life is upended. Bringing her young son to England to meet her shrewish mother-in-law is only the beginning of her trials. The dowager countess has asked a duke to assist in the new earl's education-a man whose power and position could define the course of Savannah's life. Proud and stubborn, Savannah refuses to be intimidated. And yet neither can she resist the attraction that catches fire between them.

Reformed rakehell Gabriel Armstrong, Duke of Clevedon, has no room in his life for a woman. Especially an American commoner, the widow of his childhood friend. Beautiful and bold, Savannah nevertheless captivates his imagination. Unlike her English counterparts, she speaks her mind and demands to be heard. Something that does not endear her to the dowager countess, yet which Gabriel finds fascinating. Troubles follow her from America, however. Her husband's business was in debt, his money invested in illicit trade, and his ship was not the first to be lost at sea.

Rumors abound that Savannah's husband is still alive. Forces are at work to deny her son his title. And when an interloper arrives demanding repayment or revenge, the life of Savannah's young son is in jeopardy. Savannah and Gabriel must work together to escape the shadows that could blot out the light of their future.