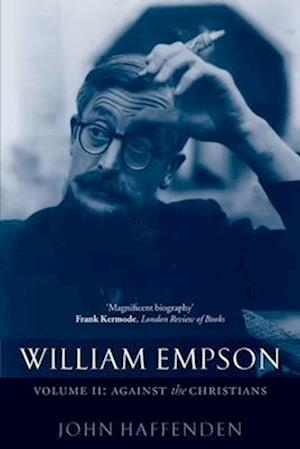 Following the acclaimed first volume, Among the Mandarins , this is the second and concluding volume of the authorized biography of William Empson, one of the foremost poets and literary critics of the twentieth century.Against the Christians begins during the Second World War and follows Empson's turbulent years of writing wartime propaganda for the BBC. As Chinese Editor, he organised broadcasts to China and propaganda programmes for the Home Service, during which time his friends and colleagues included the prickly George Orwell. The effectiveness of Empson's work for the BBC provoked the Nazi propagandist Hans Fritzsche to call him a 'curly-headed Jew' - a charge which gave him enormoussatisfaction.In 1947 he returned to China, where he was caught up in the Communist siege of the Peking and witnessed Mao Tse-tung's triumphant entry. 'I was there for the honeymoon between the universities and the communists; we were being kept up to the mark rather firmly.' He saw 'the dragooning of independent thought and the hysteria of the confession meetings'. In the late 1940s he also taught in the USA, where he relished the irony of his situation. 'My position here really seems to me very dramatic;there can be few other people in the world who are receiving pay simultaneously and without secrecy from the Chinese Communists, the British Socialists, and the capitalist Rockefeller machine.'From 1953 to 1971 he held the Chair of English Literature at Sheffield, where he engaged more vigorously than ever before in public controversy, being driven by a desire to correct the wrong-headed orthodoxies of modern literary criticism - most notably 'neo-Christianity'. He acquired massive publicity for his views on the wickedness of Christianity when he published Milton's God in 1961: 'The poem is wonderful because it is an awful warning. The effort of reconsidering Milton's God,who makes the poem so good just because he is so sickeningly bad, is a basic one for the European mind.' Haffenden presents a full account of the work on Milton, along with analyses of Empson's many other writings on subjects including Marlowe, Donne, Marvell, and Coleridge, and The Structure of Complex Words(1951).In a full and candid study of the public and private Empson, John Haffenden enables the reader to understand one of the most gifted, eccentric, witty, and controversial figures of our age - a giant of modern literature and criticism.

Forfattere
Bibliotekernes beskrivelse John Haffenden's acclaimed biography of William Empson (1906-1984), the foremost English literary critic of the twentieth century, is now available in paperback. An authoritative and compelling account and the second of two volumes exploring his remarkable life and work. 16 pages of black-and-white platesPRIZES:Winner of The Guardian, The Independent on Sunday and The Sunday Times Christmas Picks 2006.