Why Save the Bankers?

- And Other Essays on Our Economic and Political Crisis 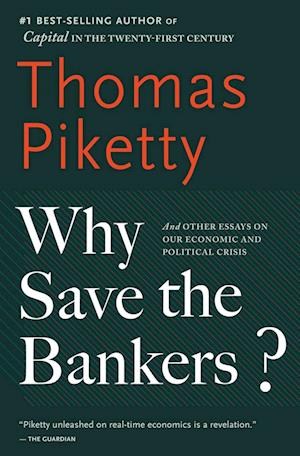 "Piketty unleashed on real-time economics is a revelation." -- Guardian

Thomas Piketty's work has proved that unfettered markets lead to increasing inequality. Without meaningful regulation, capitalist economies will concentrate wealth in an ever smaller number of hands. For years, this critical challenge to democracy has been the focus of Piketty's monthly newspaper columns, which pierce the surface of current events to reveal the economic forces underneath. Why Save the Bankers? brings together selected columns from the period bookended by the September 2008 collapse of Lehman Brothers and the terrorist attacks in Paris in November 2015. In crystalline prose, Piketty examines a wide range of topics, and along the way he decodes the European Union's economic troubles, weighs in on oligarchy in the United States, wonders whether debts actually need to be paid back, and discovers surprising lessons about inequality by examining the career of Steve Jobs. Coursing with insight and flashes of wit, these brief essays offer a view of recent history through the eyes of one of the most influential economic thinkers of our time.

"Anyone with an interest in politics, monetary policy, or international diplomacy will get a kick out of Piketty's clear discussion." -- Shelf Awareness

"If you have been influenced by Piketty's landmark work on inequality, make sure to read this next." -- Naomi Klein, author of The Shock Doctrine and This Changes Everything

[Piketty s] influence runs deep. It has become a commonplace to say that we are living in a second Gilded Age or, as Piketty likes to put it, a second Belle Epoque defined by the incredible rise of the one percent. But it has only become a commonplace thanks to Piketty s work . . . The result has been a revolution in our understanding of long-term trends in inequality. Before this revolution, most discussion of economic disparity more or less ignored the very rich. Some economists (not to mention politicians) tried to shout down any mention of inequality at all . . . It therefore came as a revelation when Piketty and his colleagues showed that incomes of the now famous one percent, and of even narrower groups, are actually the big story in rising inequality. And this discovery came with a second revelation: talk of a second Gilded Age, which might have seemed like hyperbole, was nothing of the kind . . . Piketty has transformed our economic discourse. We ll never talk about wealth and inequality the same way we used to. Paul Krugman, New York Review of Books

Piketty s treatment of inequality is perfectly matched to its moment . . . [He] has emerged as a rock star of the policy-intellectual world . . . His work richly deserves all the attention it is receiving. Lawrence H. Summers, Democracy
"