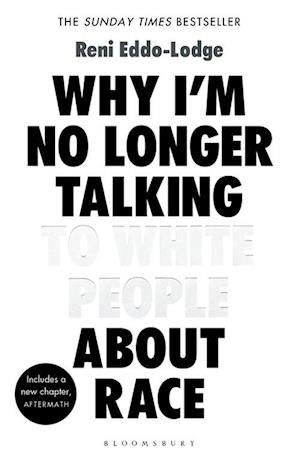 Forfattere
Forlagets beskrivelse The Sunday Times bestseller, winner of the British Book Awards Non-Fiction Narrative Book of the Year 2018, Foyles Non-Fiction Book of the Year, Blackwell's Non-Fiction Book of the Year, winner of the Jhalak Prize, longlisted for the Baillie Gifford Prize for Non-Fiction, longlisted for the Orwell Prize, shortlisted for a Books Are My Bag Readers Award. 'Every voice raised against racism chips away at its power. We can't afford to stay silent. This book is an attempt to speak.' The book that sparked a national conversation. Exploring everything from eradicated black history to the inextricable link between class and race, Why I'm No Longer Talking to White People About Race is the essential handbook for anyone who wants to understand race relations in Britain today. A wake-up call to a nation in denial about the structural and institutional racism at its heart. In 2014, award-winning journalist Reni Eddo-Lodge wrote about her frustration with the way discussions of race and racism in Britain were being led by those who weren't affected by it. She posted the piece on her blog, and gave it the title 'Why I'm No Longer Talking to White People About Race'. Her words hit a nerve. The post went viral, and comments flooded in from others desperate to speak up. Galvanised by this, she decided to dig into the source of these feelings. The result is a searing, illuminating exploration of what it is to be a person of colour in Britain today.