Why Aren't They There?

- The Political Representation of Women, Ethnic Groups and Issue Positions in Legislatures 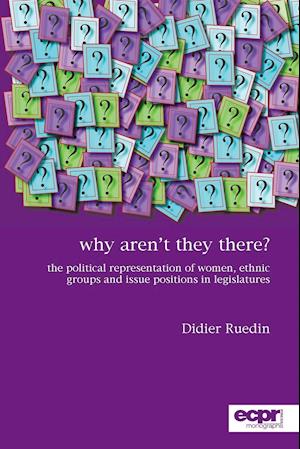 Why Aren't They There? is a comprehensive study of political representation in a cross-national format. It examines the representation of women, ethnic groups, and policy positions in a cross-country comparison. Using new data on ethnic groups in legislatures, the book is a significant step forward in the analysis of political representation. The systematic approach of the book allows a ground-breaking examination of how different forms of representation - women, ethnic groups, issue positions - are interlinked. "An excellent piece of work that jointly discusses two dimensions and two groups that have been studied too often apart from one another: descriptive and substantive representation, and women and ethnic groups. It uses new and rich data, the hypotheses are well embedded in the existing theories and empirical research and the research design and methods are intelligent. It is furthermore, well written and comprehensive. In short: a must-read for scholars interested in representation and representativeness of today's legislatures." Karen Celis, Research Professor, Vrije Universiteit Brussel and co-convenor of the ECPR Standing Group on Gender and Politics."Ruedin adds to our understanding of political representation with an impressive comparative study of the gender and ethnic composition of national legislatures, two largely separate research fields; the representation of women and of ethnic groups. Alongside this he assembles relevant material from literature on parties, electoral studies, feminist research and political theory; using it to develop a single integrated theoretical framework and to develop hypotheses, which he tests on multiple data sources (including new data and the World Values Survey). Why Aren't They There? is a comprehensive and significant addition to the literature on this topic and should be compulsory reading for all students of political representation." Dr Rosie Campbell, Senior Lecturer in Politics, School of Politics and Sociology, Birkbeck, University of London