Whisked Away By The Italian Tycoon / Starting Over With The Sheriff 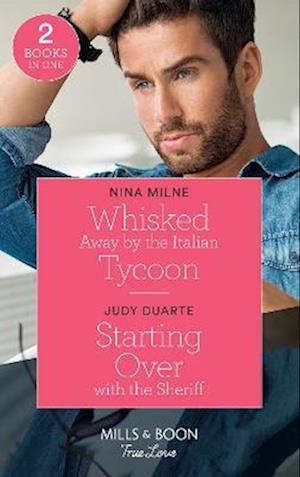 Whisked Away by the Italian Tycoonby Nina Milne Unexpected trip to paradise... First-class ticket to happily-ever-after? Photographer Emily has learned the hard way that in life you only have yourself. So the impromptu arrival of billionaire Luca has her guard up. Still, Emily can't refuse his offer to shoot an ad campaign on the beautiful Indian island of Jalpura...and get her career back on track! But as Emily falls for the magic of Jalpura, can she stop herself falling for Luca? Starting Over with the Sheriffby Judy Duarte Starting anew? But what if he learns the truth? Marissa Garcia fled to small-town Montana to escape her tangled past. The sparks flying between her and local sheriff Brandon Dodd? Not in her plans. Even if he's drop-dead handsome...and the twins that he's raising on his own instantly find a place in her heart. But when the by-the-book lawman discovers the truth about Marissa, is their romance doomed before it ever begins?