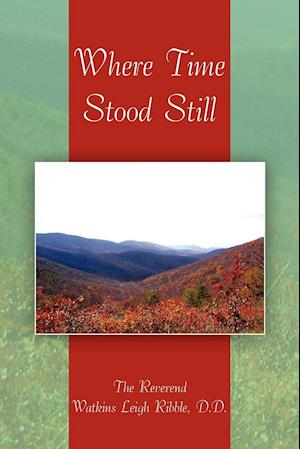 During the 1920s and early 1930s, the people of the Blue Ridge Mountains of Virginia were living, thinking, and working as their forefathers had done for centuries. Their resistance to change extended to most areas of their lives, including their archaic way of speaking, the low position of women in the mountain home and society, and their outdated farming methods that drained the land of its productiveness each succeeding year. Their invariable response to suggestions for change was hostile: "This is the way my pa did it, and it was the way his pa did it. We ain't never done no different." Since those days--especially after the establishment of the Shenandoah National Park in 1935--vast changes have swept this primitive civilization away, and the picturesque mountaineer of story and legend has become a fading memory. Early in his ministry, Dr. Ribble worked as a missionary among these hardy but culturally-isolated Blue Ridge Mountain people. In his book Where Time Stood Still, he recounts delightful stories about the Blue Ridge Mountain folk, painting a vivid portrait of these mountaineers. A few of these stories involve the stereotypical hillbilly, such as shotgun weddings and illegal moonshining. On the whole, however, his stories paint a much more complete and sympathetic picture of these mountain people, whom he came to know well and for whom he came to feel great respect and affection.