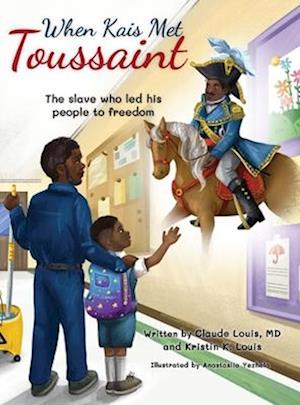 "It is not a liberty of circumstance, conceded to us alone, that we wish; it is the adoption(absolute) of the principle that no man, born red, black or white, can be the property of his fellow man."

Who are the heroes of your heritage? We know well the stories of Dr. Martin Luther King Jr. and some of the other courageous African American heroes who championed equality. In this touching children's book, you will uncover an inquisitive 3rd grade student, Kais, as he has a chance to encounter with an unexpected historian who introduces him to Toussaint Louverture, a genuine legend from the late 1700s. "When Kais Met Toussaint" is a thoughtfully written story that illuminates a less famous Haitian revolutionary; a freed slave who becomes commander of his countrymen and ultimately leads his people to freedom. It conveys an endearing encounter which explores one of the first and most successful ambassadors for freedom and equality who directly inspired American abolitionists. The story is beautifully rendered by Anastasiia Yezhela and includes truthful challenges of immigrant professionals.

The story is followed by informative notes to parents and educators offering further details about Haiti's past, current and international relations.

All proceeds from the book will go towards education initiatives in Haiti via Words In Action Foundation.