When Greeks think about Turks 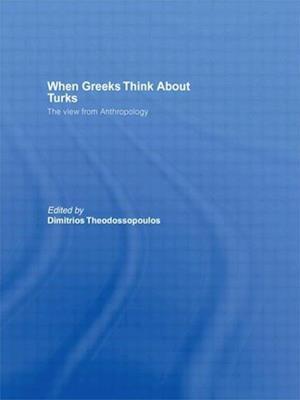 Drawing upon anthropological studies that document culturally specific ways of perceiving ethic Others in Greece and Cyprus, this book explores the cultural boundaries of the categories 'Greek' and 'Turk', and compares views on what it means to be one of these ethnic groups or both. The contributors examine the opinions of diverse social groups, such as ordinary middle-class citizens, intellectuals, army officers, children, villagers, refugees from Asia Minor, and Greek-and-Turkisj-Cypriots. They also investigate the local attitudes to international politics and highlight the contextual - as opposed to immutable and essentialist - meaning of evaluations about nations, such as Greece, Turkey and Cyprus, and their citizens.When Greeks think about Turks carefully unpacks the cultural meaning of popular metaphors, stereotypes and versions of history as these are articulated in the context of discussions about the Turks in Greece. It sets the template for understanding how local perceptions of resemblance and difference provide a conceptual framework for defining and negotiating ethnic identity at the local, national and international level. It sheds valuable light on the politics of identity-making and the constitution of nationalism in Greece and Cyprus.This book was previously published as a special issue of South European Society and Politics.