What's Wrong with the British Constitution? 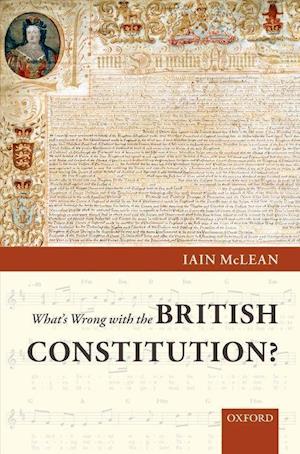 In his writings, David Hume set out to bridge the gap between the learned world of the academy and the marketplace of polite society. This collection, drawing largely on his Essays Moral, Political, and Literary (1776 edition), which was even more popular than his famous Treatise of Human Nature, comprehensively shows how far he succeeded.From `Of Essay Writing' to `Of the Rise and Progress of the Arts and Sciences' Hume embraces a staggering range of social, cultural, political, demographic, and historical concerns. With the scope typical of the Scottish Enlightenment, he charts the state of civil society, manners, morals, and taste, and the development of political economy in the mid-eighteenth century. These essays represent not only those areas where Hume's arguments are revealingly typical of his day, but also where he isstrikingly innovative in a period already famous for its great thinkers. ABOUT THE SERIES: For over 100 years Oxford World's Classics has made available the widest range of literature from around the globe. Each affordable volume reflects Oxford's commitment to scholarship, providing the most accurate text plus a wealth of other valuable features, including expert introductions by leading authorities, helpful notes to clarify the text, up-to-date bibliographies for further study, and much more.In this provocative new study, Iain McLean argues that the traditional story of the British constitution does not make sense. It purports to be both positive and normative: that is, to describe both how people actually behave and how they ought to behave. In fact, it fails to do either; it is not a correct description and it has no persuasive force. The book goes on to offer a reasoned alternative.The position that still dominates the field of constitutional law is that of parliamentary sovereignty (or supremacy). According to this view, the supreme lawgiver in the United Kingdom is Parliament. Some writers in this tradition go on to insist that Parliament in turn derives its authority from the people, because the people elect Parliament. An obvious problem with this view is that Parliament, to a lawyer, comprises three houses: monarch, Lords, and Commons. The people elect only one ofthose three houses. This book aims to show, contrary to the prevailing view, that the UK exists by virtue of a constitutional contract between two previously independent states. Professor McLean argues that the work of the influential constitutional theorist A.V. Dicey has little to offer those who really want to understand the nature of the constitution. Instead, greater understanding can be gleaned from considering the 'veto plays' and 'credible threats' available to politicians since 1707. He suggests that theidea that the people are sovereign dates back to the 17th century (maybe the 14th in Scotland), but has gone underground in English constitutional writing. He goes on to show that devolution and the UK's relationship with the rest of Europe have taken the UK along a constitutionalist road since 1972,and perhaps since 1920. He concludes that no intellectually defensible case can be made for retaining an unelected house of Parliament, an unelected head of state, or an established church. The book will be essential reading for political scientists, constitutional lawyers, historians, and politicians alike.