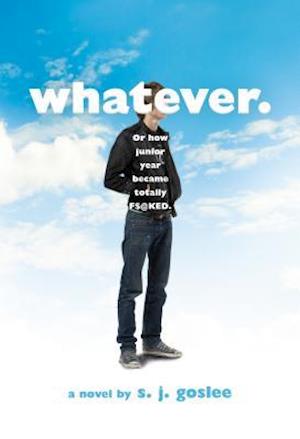 It's like the apocalypse came, only instead of nuclear bombs and zombies, Mike gets school participation, gay thoughts, and mother-effin' cheerleaders.

Junior year is about to start. Here's what Mike Tate knows: His friends are awesome and their crappy garage band is a great excuse to drink cheap beer. Rook Wallace is the devil. The Lemonheads rock. And his girlfriend Lisa is the coolest. Then Lisa breaks up with him, which makes Mike only a little sad, because they'll stay friends and he never knew what to do with her boobs anyway. But when Mike finds out why Lisa dumped him, it blows his mind. And worse--he gets elected to homecoming court.

With a standout voice, a hilariously honest view on sex and sexuality, and enough f-bombs to make your mom blush, S. J. Goslee's debut YA novel Whatever. is a fresh, modern take on the coming-out story.

Praise for Whatever.: or how junior year became totally f$@cked

"Goslee's portrayal of this existential crisis is as humorous as it is grounding.... Recommended for young adults who enjoy realistic fiction such as Bryan Lee O'Malley's Scott Pilgrim series or books by John Green, Adam Silvera, or John Corey Whaley." --School Library Journal, starred review