Whatever You May Say 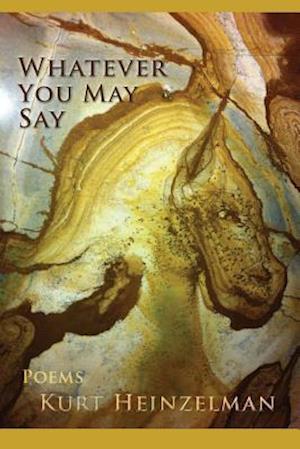 “Rich and inventive, Kurt Heinzelman’s poems are funny, serious, and everything in between, often all at once. Again and again their verbal playfulness opens up to genuine feeling. These poems are sometimes boisterous and sometimes sad, sometimes learned and sometimes comic, but always a pleasure.”

—Lawrence Raab, National Book Award Finalist for Mistaking Each Other for Ghosts

“I love these poems for their delightfully fresh expression, as if a dozen ventriloquists in a painting by, say, René Magritte were addressing you. So many surprises here with poetic forms and topics—from the ghazal to the closet drama to the sonnets to the riffs on the haiku to the fresh and convincing translations to the range of literary allusions to the demotic to that crazy little dachshund that keeps sleeping on the couch. There’s even a terrific children’s book (“The Heinzelmännchen”) embedded in these pages. How aptly named this collection is: Whatever You May Say. Four words which Heinzelman approaches with half a century of wit and savvy philosophical inquiry behind him, and all presented lightly with such sprezzatura.”

“I was thoroughly prepared to enjoy this new book and I was not disappointed. Heinzelman’s poems consistently possess the qualities of music and intelligence without which poetry cannot be good.”

—Steven Weinberg, Nobel Laureate in Physics, author of To Explain the World

“Heinzelman’s newest collection is filled with lines “drawn taut as water plaiting down” (“Elevations: A Photoessay”). Strikingly vivid and often hilarious and wise, the poems meditate on a wide range of subjects, from the history of sunflowers, barking dogs, the Texas landscape(s), postures and behaviors of dachshunds, the vagaries of memory, to wars of all sorts and in various parts of the world. If only for the luscious sounds of the “chittering flocks of swallows [that] prey / At evening on the antiquities of the day” (“Lines Written After Revisiting Tintern Abbey”); for the witty list in “Birds of Oz”; for the dynamite line “eggy slidings of slapstick blue” that ends “Skyscrapers by the Sea”; and for the surprising ending of “North of Austin”: “where turkey buzzards rotate / slowly overhead like couples / all aglitter underneath their / honkytonk’s mirrored ball,” and for much more, Whatever You May Say is not a book to miss!”

—Wendy Barker, author of the John Ciardi Poetry Prize for One Blackbird at a Time