What You Think You Know About Football is Wrong 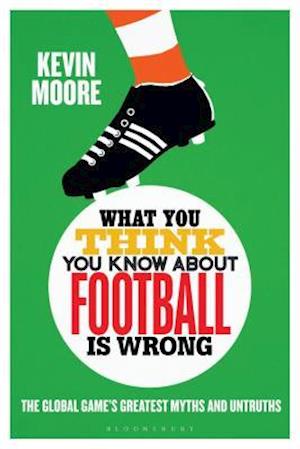 Our view of football will never be the same again... Written by a world-respected football historian, this football unique gift title reveals the global game's greatest myths and untruths.'Takes a wrecking ball to many of the myths and assumptions about football that usually pass unchallenged' John Motson'A must-read' These Football TimesA feast of contrary and controversial assertions which make you question so much you assume to be true about the game.' Guy MowbrayFootball has been completely mythologized and many of the things football fans think they know about football and its history turn out not to be true. We want to believe the myths, and so they become accepted. So much football writing is not properly researched, and so the myths get repeated, again and again and again. Written by Kevin Moore, the founding director of the National Football Museum (the world's leading football museum), this thoroughly researched and authoritative book debunks 50 of the greatest myths surrounding football. Backed up by the highest level of academic research yet written in an accessible style, the book explores the truth behind many accepted myths. For example, did you know:* The Germans took football to Brazil, not the English* Rugby and not football could quite easily have been the world's leading sport* There are gay professional players - and always have been! * Football hooliganism did not begin in England* Shirt colours do make a difference * Cambridge and not Sheffield is the home of the oldest football club in the world* Arsenal should not be in the Premier League... they cheated to be there* The Dynamo Kiev team were not executed after beating a German SS team in 1941* England did not win the World Cup fairly in 1966 ... but not in the way you think!