What the Bible Says About the Collapse of the Universe: Book Ii

- The Doctrine of Third Wave Christianity 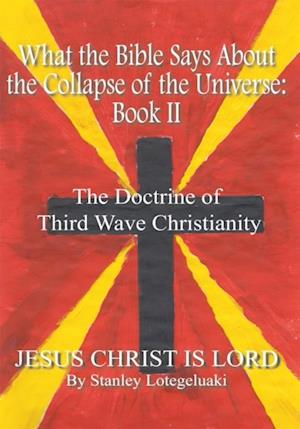 This book is a sequel to my first book What the Bible says about the collapse of the universe, Life before the big bang. And the 200 billion year history of Christianity- the invisible war. This book The doctrine of THIRD WAVE CHRISTIANITY is really a distillation of the first book. The core of what the Lord revealed to me. It is composed of small booklets- Jesus, Satan, The Beast, The Lake of fire, and older booklets from the first book. The Catholics were the first wave and they discomfited Satan, The Protestants were the Second wave and they swarmed Satans camp and now are the Third wave Christians, space age Christians who believe in the collapse of the universe and Life before the big bang who will over run Satans camp and completely wipe them out. The book is designed for Christians who are also scientists and see no problem with the Bible and its compatibility with science. It gives information about the collapse of the universe, but with new material about the Beast , Satan ,Jesus , Africas unification and the founding history of all the nations . Third wave Christians are not to go out and make new Churches but they are people who ate the refreshing new information that we missed in the Bible, space age information. This book proves that Christianity is superior to Islam, Hinduism, Buddhism , Communism, and those who make science into a religion. Because the Bible says the universe will collapse and Science says the universe will collapse thats proof the Bible is Truth and that God exists. Logicians and Christians who are Scientists can use this book to prove that the Bible is True therefore God exists.