- Some Implications for Psychological Therapies 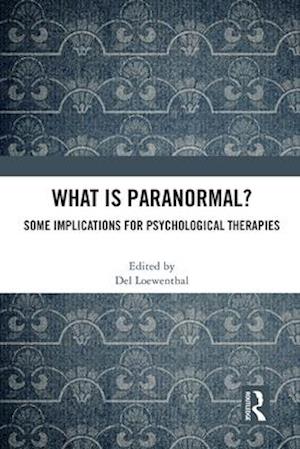 'A layman will no doubt find it hard to understand how pathological disorders of the body and mind can be eliminated by 'mere' words. He will feel that he is being asked to believe in magic. And he will not be so very wrong for the words which we use in our everyday speech are nothing more than watered down magic.' (Freud) This book provides further developments of such ideas, including Freud's uncanny, Jung's synchronicity, Daniels' transpersonal, Clarke's mindfulness and Sollod's anomalous experiences. The paranormal could be seen as being fundamental to the psychological therapies. Occasionally a writer brings this potential to our attention but questions of science, evidence-based practice, etc. continue to dominate. Yet does this continue to lead to 'what's denied running even more wild'? Further, might the lessening of the paranormal be primarily what is lost, the aura, through the increase in internet therapy? The question of the paranormal and the psychological therapies continues to persist, not only for psychoanalysis but the psychological therapies in general. This book attempts to address that. The chapters in this book, apart from a new introduction and a new chapter, were originally published in the European Journal of Psychotherapy and Counselling.