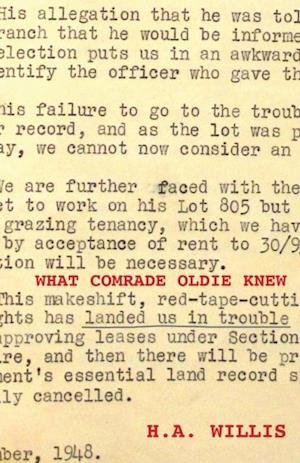 The summer of 2010-11 was Perth's driest for a century. The city's reservoirs were down to the mud and the ground water aquifers were being pumped for all they could give. Toiling away in the State archives, Comrade Oldie discovers some rather disturbing facts about those aquifers - information some powerful people would rather not be disclosed. When a former colleague dies in mysterious circumstances, and a manuscript goes missing, Oldie realizes that he had better be careful about what he says to whom - then he meets Blondie, a gorgeous photographer he wants to impress. Before he knows it, trouble is coming straight at Oldie with the momentum of a heavily loaded, speeding truck. He discovers you don't need an earthquake to find out you can't trust the ground under your feet. Although seriously ill with hepatitis C, Oldie is a man who will be late to -- or even miss -- his own funeral. He decides that in his circumstances even an honest man has little choice other than to just take the money and run. Central to the novel is an affectionate depiction of Perth and life on Australia's west coast. With a cast of characters including a building that talks, Professor Mayakovsky and Judex's dove, Willis gives himself space to combine droll humor with social critiques.i