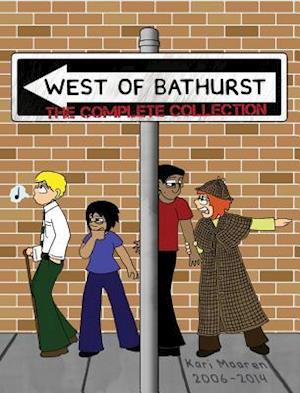 In this complete collection of the webcomic West of Bathurst, which ran between 2006 and 2014, Marie Dumont, a graduate student newly arrived in Toronto, takes up residence at U of T's Davies College and finds herself sucked into a strange world in which robes are expected, socialising is mandatory, and everybody puts way too much effort into the annual Murder Game. Struggling to pay at least some attention to her studies as she juggles old ghosts and new friendships, Marie stumbles through a world that is almost ordinary, except perhaps when mythological beings wander the streets of Toronto or objects burst spontaneously into flame. She is accompanied by cynical Rahim, dotty Sherlock Holmes-wannabe Barbara, and devious Casey, who is quite possibly Satan. In the process, Marie tries as hard as any twenty-something graduate student never to grow up. She also consumes a fair number of maple doughnuts, but that's only to be expected.