- The illustrated history of the German Army in WWII 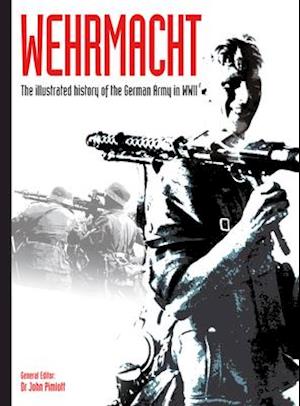 Along with the Roman Legions and Napoleon's Grande Arme e, the German Army of World War II is considered one of the best-organised and most formidable military formations in history, sweeping all opposition away in the early years of World War II. Wehrmacht features every major campaign, including the early Blitzkrieg ('Lightning War') attack on Poland, the Low Countries and France; the swift conquest of the Balkans; the long war on the Eastern Front; the fight for North Africa and the Mediterranean; and the final defence of the Reich.Wehrmacht provides a full pictorial record of the German Army, from the recruiting drive pre-war to the final days of the Reich. Key figures, such as Hitler himself, and famous generals such as Guderian and Rommel, are also included.

Forfattere
Bibliotekernes beskrivelse With over 200 photos, Wehrmacht provides a full pictorial history of the vehicles, key figures and everyday life of the German Army in WWII, from the Blitzkrieg invasions of Poland and France to the last stand in Berlin. 250 b&w photos; 250 Illustrations, unspecified