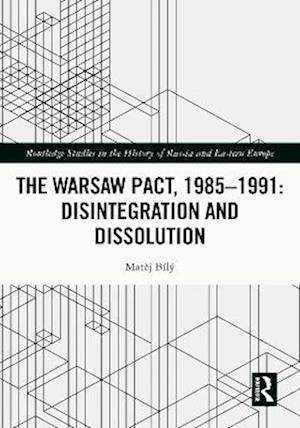 This book analyzes the last phase of the Warsaw Pact based on unusually large-scale archival research conducted in many countries. Focusing on the changes in the organization's functioning after Mikhail Gorbachev came to power in the Soviet Union, the author examines the role played by the Warsaw Pact in the final stages of the Cold War, as well as exploring the deepening conflicts between individual member states which resulted from the changing international situation and Gorbachev's initiatives to reform the East European state-socialist dictatorships. The book argues that the causes of the rapid dissolution of the Warsaw Pact in the early 1990s were due to many complicated factors, not simply the collapse of communist power in Eastern Europe, factors such as the loss from early in the second half of the 1980s of important internal ties and the failure to create new ties, disputes between individual member states, and the questioning of the overall legitimacy of the organization, which was indispensable for its effective functioning. The book also highlights the impact of external pressures and developments on the international scene. Overall, the book reveals how an apparently robust and solid multilateral organization can so quickly and unexpectedly disappear.