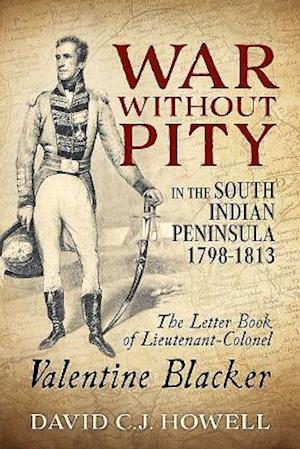 In 1798 Valentine Blacker, the son of an Irish clergyman, born in Armagh, left the United Kingdom for a military career in the Madras Army. He was favoured by the presence in India of his uncle, Colonel Barry Close, the Adjutant General. His active service as a young cavalry officer in Southern India covered several wars and rebellions. He was wounded, suffered disease and the loss of many friends. From the day of his arrival, for the next fifteen years, he wrote regularly to his father until the latter's death in 1813. The letters to some extent expose the truth of how the British held India. Rebellion was ruthlessly crushed, wounded executed on the battlefield and if besieged garrisons failed to surrender, after a successful storm, they were 'put to the sword.'This was viewed as part of the usages of war by either side, and the letters are intermixed with endearments for his family and his regret at the lack of correspondence from home. In juxtaposition to the executions following a native infantry mutiny in 1806, the 'officer's mutiny' of 1809 was dealt with by the utmost leniency. The East India Company is spared little criticism for its government of Madras and mismanagement of the army.The correspondence ceases in 1813, but Valentines career progressed until the end of the 3rd Maratha and Pindari War of 1817-1819 when he was the the Quartermaster General of the Madras Army, and wrote 'A Memoir of the Operations of the British Army in India.' In 1823 he was promoted to Lieut. Col. and appointed The Surveyor General of India at Calcutta where he died in 1826.

Forfattere
Bibliotekernes beskrivelse The letters and adventures of a 20 year old East India Company Officer from Armagh, who served and fought in the Madras Army from 1798-1826. 14 b/w ills, 2 maps, 5 tables