War and Underdevelopment: Volume 1: The Economic and Social Consequences of Conflict 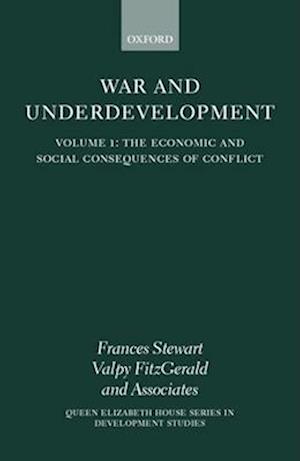 Wars, especially civil wars, are among the most serious causes of human suffering and underdevelopment. Yet economic analysis of developing countries at war is relatively rare. These volumes aim to reverse this neglect, tracing the economic and social consequences of conflict both theoretically and through empirical investigations, including seven country case studies. A major objective is to identify policies which may reduce the heavy human and economic costs. Volume One provides a general framework for the analysis, examines the political economy of countries at war, and provides an empirical overview of the costs of war for the poor countries worst affected by conflict.The approach is multidisciplinary: political and sociological analysis is needed in order to understand motivations and behaviour during conflict; while economic analysis is necessary to evaluate how poor people are affected. The analysis includes an investigation of how the international system, including food aid, affects the war economies, and identifies international as well as domestic policies which may reduce the human and economic costs of conflict.The subject is particularly important in view of the high incidence of wars in poor countries. Between 1950 and 1990, around 15 million deaths were caused (directly or indirectly) by war in developing countries. The end of the Cold War led to a transition to peace in many of the areas in which conflict had been fuelled by East-West antagonism, but new wars erupted. From 1989 to 1995, between 34 and 51 armed conflicts were waged each year, the great majority in poor developing countries.These volumes investigate economic and social consequences at macro-, meso- and micro- levels, aiming to identify the indirect costs (e.g. via inflation and reduced entitlements) as well as direct costs of military operations. The in-depth country case studies published in Volume Two (Afghanistan, Mozambique, Nicaragua, Sierra Leone, Sri Lanka, Sudan and Uganda) are summarized in Volume One. These explore the main economic mechanisms operating during war and the policy responses ofgovernments and international actors, showing how each can enlarge the costs and further fuel the conflicts. The large variations in this response and in the consequent costs point to domestic and international policies which can reduce the human and economic costs even before peace is restored.

Forfattere
Bibliotekernes beskrivelse This series traces the economic and social consequences of conflict both theoretically and through empirical investigations, including seven country case studies. Volume 1 provides a general framework for the analysis. figures