- David Koresh, the Branch Davidians, and A Legacy of Rage 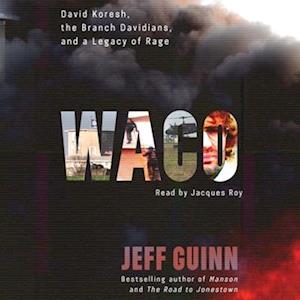 The definitive account of the disastrous siege at the Branch Davidian compound in Waco, Texas, from former investigative reporter Jeff Guinn, bestselling author of Manson and The Road to Jonestown.For the first time in thirty years, more than a dozen former ATF agents who participated in the initial February 28, 1993, raid speak on the record about the poor decisions of their commanders that led to this deadly confrontation. Revelations in this book include why the FBI chose to end the siege with the use of CS gas; how both ATF and FBI officials tried and failed to cover up their agencies' mistakes; where David Koresh plagiarized his infamous prophecies; and direct links between the Branch Davidian tragedy and the modern militia movement in America. Notorious conspiracist Alex Jones is a part of the Waco story. So much is new, and stunning. Guinn puts you alongside the ATF agents as they embarked on the disastrous initial assault, unaware that the Davidians knew they were coming and were armed and prepared to resist. Drawing on this new information, including several eyewitness accounts, Guinn again does what he did with his bestselling books about Charles Manson and Jim Jones, shedding new light on a story that we thought we knew.