- Victoria Crosses - Antecedent and Allied Regiments of the Staffordshire Regiment 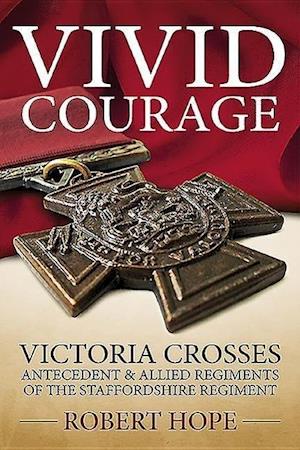 In the history of the Victoria Cross, this is the first book exclusively written about the recipients of this prestigious award who were members of this famous regiment. This is the fifth book written by the author - and like his previous works, contains a wealth of facts, figures and information. The Staffordshire Regiment existed in excess of 300 years and are exceedingly proud of their loyal, long and distinguished service to Crown and Country. The Victoria Cross is this country's highest honour that can be bestowed on individuals for most conspicuous bravery, or some daring or pre-eminent act of valour, self-sacrifice or extreme devotion to duty in the presence of the enemy. Since the introduction of the Victoria Cross Medal in 1856, a number of unique records have been created by the 'Staffords': a total of 13 Victoria Cross Medals have been awarded to members of the Staffordshire Regiment's antecedent regiments - and nine former soldiers, with other regiments, went on to be awarded the medal. Four holders of this highly-prized award served with the regiment during their army careers; 10 soldiers of their allied regiments - two from the West Indian Regiment (Jamaica Regiment) and eight from the 8th/7th Battalion, The Royal Victoria Regiment (Australian Army) - were awarded the Victoria Cross. Brief details are given on the histories of the Staffordshire Regiment and her allied regiments whose members were awarded the VC, and it also contains a brief history of the Victoria Cross. Summaries are given on the various wars and campaigns in which each of the Victoria Crosses were earned - and the life and times of these individual soldiers (including their VC actions) are recorded. These give a personal insight into their lives, irrespective of rank, or of noble birth. Some were killed in action, or died of wounds whilst carrying out acts of valour; some were to die young, whilst others lived for many years; some lived comfortable lives whilst others struggled - resorting to the workhouse, or dying in poverty. For some Victoria Cross recipients, there may be plaques or memorials; for others, an unmarked common or pauper's grave is their final resting place. Like the author's previous books, which were well researched, this book brings history to life and unites all military personnel regardless of rank and status in life. These remarkable soldiers have been fortunate enough to be recognised - and accordingly, it is their epitaph and legacy that their names are recorded for posterity.

Forfattere
Bibliotekernes beskrivelse This is the first book exclusively written about the recipients of the Victoria Cross who were members of this famous regiment. 75 b/w photos, 1 map, 1 regimental tree & 4 regist