Vittoria Colonna and the Spiritual Poetics of the Italian Reformation 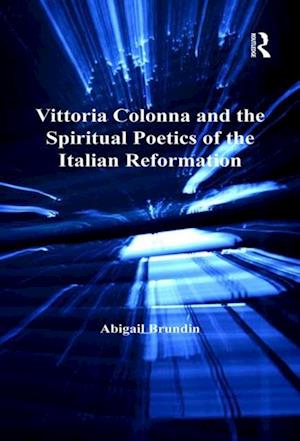 Vittoria Colonna was one of the best known and most highly celebrated female poets of the Italian Renaissance. Her work went through many editions during her lifetime, and she was widely considered by her contemporaries to be highly skilled in the art of constructing tightly controlled and beautifully modulated Petrarchan sonnets. In addition to her literary contacts, Colonna was also deeply involved with groups of reformers in Italy before the Council of Trent, an involvement which was to have a profound effect on her literary production. In this study, Abigail Brundin examines the manner in which Colonna's poetry came to fulfil, in a groundbreaking and unprecedented way, a reformed spiritual imperative, disseminating an evangelical message to a wide audience reading vernacular literature, and providing a model of spiritual verse which was to be adopted by later poets across the peninsula. She shows how, through careful management of an appropriate literary persona, Colonna's poetry was able to harness the power of print culture to extend its appeal to a much broader audience. In so doing this book manages to provide the vital link between the two central facets of Vittoria Colonna's production: her poetic evangelism, and her careful construction of a gendered identity within the literary culture of her age. The first full length study of Vittoria Colonna in English for a century, this book will be essential reading for scholars interested in issues of gender, literature, religious reform or the dynamics of cultural transmission in sixteenth-century Italy. It also provides an excellent background and contextualisation to anyone wishing to read Colonna's writings or to know more about her role as a mediator between the worlds of courtly Petrachism and religious reform.