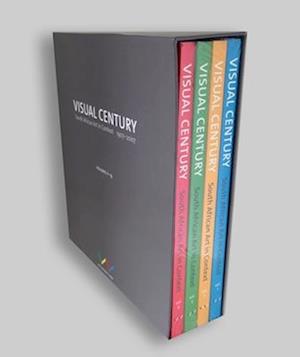 Perspectives on South African art and culture from 1907 to 2007 Given the need to construct a national archive, this work is a stellar example of what local productions (researching, writing, publishing) can mean as we tell our own stories, especially against the broader movement for a more inclusive, international art history that recognises and celebrates the contributions made in South Africa. This project is the first to bring together such a wide range of local writers and perspectives. Project initiator and director Gavin Jantjes is a South African artist currently based at Norway's National Museum. Pallo Jordan, former Minister of Arts and Culture, supported the idea with seed funding to commission and develop the manuscript. Jantjes, together with editor-in-chief, Mario Pissarra of Africa South Arts Initiative (ASAI), commissioned and oversaw the exciting process of writing the book. Visual Century Volume 1: 1907-1948 Volume one begins after the South African (Anglo-Boer) War, at a time when efforts were being made to unify the white "races," and ends with the coming to power of the Afrikaner nationalists. This period encompasses two world wars, the steady erosion of the rights of black South Africans, and the rise of organized black South African resistance to white rule. In terms of art history, it begins with the appropriation of South African art into the lexicon of Western modernism, and ends with growing evidence of the magnetism of European and North American art production for South African artists, white and black. This volume provides critical perspectives on the ideological and institutional frameworks for white and black artists of the period, and the art they produced. Discussions of public art and architecture, traditionalist African art, and Western style painting and sculpture are complemented with consideration of the roles played by museums, art education, art societies and exhibitions, art historical writing and patronage. Fresh perspectives on the art of the first half of the twentieth century.