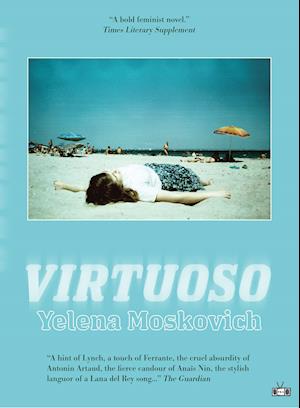 Jana was born in Prague shortly after the self-immolating Czech martyrs Jan Palach and Jan Zajic committed their ritual protestations against Soviet influence. As Communism began to crumble, Jana's unremarkable life becomes more remarkable when a precocious young girl named Zorka moves into the apartment building with her mother and sick father. With her signature two-finger salute and abrasive wit, Zorka flavors the girls' days against her mother's protestations to not "be weird." But after scorching her mother's prized fur coat and stealing from a nefarious teacher, Zorka suddenly disappears. Aimee Saint-Pe married young to an older woman, Dominique, an actress whose star has crested and is in decline. After years of tumult, the couple find themselves on vacation in Portugal when Dominique abruptly passes, with Aimee returning to Paris convinced she's being followed by a blue mist. A quixotic journey of self-discovery, Virtuoso follows Zorka as she comes of age in Wisconsin and Boston amidst a backdrop of clothing logos, MTV, computer coders, and transgender youth. But it isn't till a Parisian conference hall brimming with orthopedic mattresses and therapeutic appendages when Jana first encounters Aimee, their fates steering them both to a cryptic bar on the Rue de Prague, and, perhaps, Zorka. With a distinctive prose flair and spellbinding vision, Virtuoso is a story of love, loss, and self-discovery that heralds Yelena Moskovich as a brilliant and one-of-a-kind visionary.