Villa Magna: An Imperial Estate and its Legacies

indgår i serie Archaeological Monographs of the British School at Rome 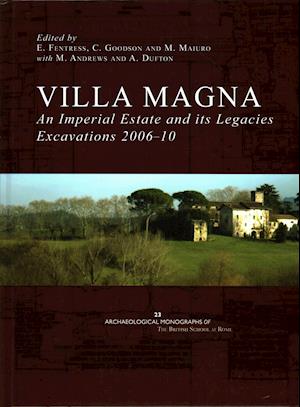 The evocative site of Villamagna, rising in lovely solitude against the steep wooded backdrop of the Monti Lepini, has enormous importance; but its imperial villa, known from the letters of Marcus Aurelius, has been largely ignored until recently, with interest focusing upon the medieval monastery that occupied the site. This volume presents the fascinating story of the site, from imperial villa, to a late antique successor, monastic complex, village, cemetery and late medieval castrum. Detailed, systematic study of the site and setting by non-invasive techniques and excavation has offered the scope to address a series of major questions; and the results are interpreted, setting them in the context of the documentary history of the site and its immediate neighbourhood, and of the broader history of central Italy, from around the first century through to the fourteenth. Each period of the site is considered separately, with the buildings described and the related finds (including pottery, glass, bones and environmental data) discussed. The volume will be of great importance for all scholars of Roman and medieval Italy.