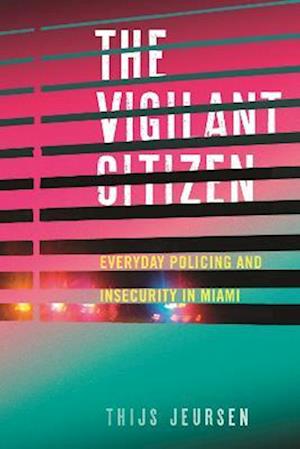 How the problematic behavior of private citizens-and not just the police force itself-contributes to the perpetuation of police brutality and institutional racism'Warning: Neighborhood Watch Program in Force. If I don't call the police, my neighbor will!'Signs like this can be found affixed to telephone poles on streets throughout the US, warning trespassers that the community is an active participant in its own policing efforts. Thijs Jeursen calls this phenomenon, in which individuals take on the responsibility of defending themselves and share with the police the duty to mitigate everyday insecurity, 'vigilant citizenship.'Drawing on eleven months of fieldwork in Miami and sharing the stories and experiences of police officers, private security guards, neighborhood watch groups, civil society organizations, and a broad range of residents and activists, Jeursen uses the lens of vigilant citizenship to extend the analysis of police brutality beyond police encounters, focusing on the often blurred boundaries between policing actors and policed citizens and highlighting the many ways in which policing produces and perpetuates inequality and injustice. As a central premise in everyday policing, vigilant citizenship frames racist and violent policing as matters of personal blame and individual guilt, ultimately downplaying the realities of how systemically race operates in policing and US society more broadly. The Vigilant Citizen illustrates how a focus on individualized responsibility for security exacerbates and legitimizes existing inequalities, a situation that must be addressed to end institutionalized racism in politics and the justice system.