Vengeance in the Middle Ages 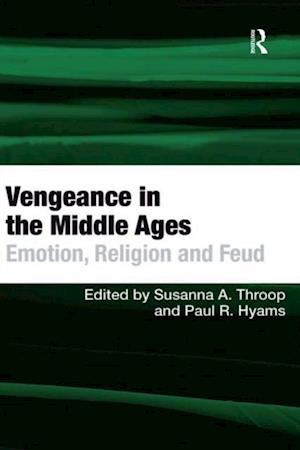 This volume aims to balance the traditional literature available on medieval feuding with an exploration of other aspects of vengeance and culture in the Middle Ages. A diverse assortment of interdisciplinary essays from scholars in Europe and North America contest or enlarge traditional approaches to and interpretations of vengeance in the Middle Ages. Each essay attempts to clarify the multifaceted experience of vengeance within a specific medieval context'a particular region, a particular text, a particular social movement. By asking what relationship a distinct factor like authorship or religion has with the concept of vengeance, each author points towards the breadth of meanings of medieval vengeance, and to the heart of the deeper and broader questions that spur scholarly interest in the subject. Geographically, the essays in the volume highlight Western Europe (particularly the Anglo-Norman world), Scotland, Ireland, Spain, and Portugal. Thematically, the essays are concerned with heroic cultures of vengeance, vengeance as a legal and political tool, Christian justification and expression of vengeance, literature and the distinction between discourse and reality, and the emotions of vengeance. Methodologically, these interdisciplinary studies incorporate tools borrowed from anthropology, the study of emotion, and modern social and literary theories. This volume is aimed at professional scholars and graduate students within the broad field of medieval studies, including the subfields of history, literature, and religious studies, and is intended to inspire further research on medieval vengeance. However, this collection will also prove interesting to non-medievalists interested in the history of emotion, the justification of human conflict, and the concept of feud and its applicability to specific historical periods.