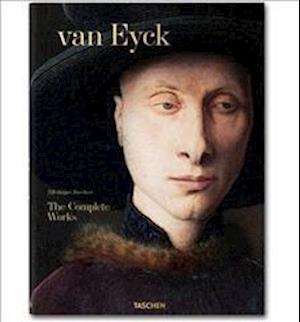 Medieval realist. Van Eyck under the magnifying glass. After our sumptuous, XL monographs on Leonardo, Michelangelo, Caravaggio, and Klimt, Taschen now puts Jan van Eyck in the spotlight. Leader of the Early Netherland School and arguably the most important painter of the Early Renaissance, van Eyck (c. 1390-1441) completely revolutionized the use of oil paints, allowing for great intensity and depth of color; his own contemporaries were astounded by the detailed realism of his style and the luminosity of his palette. With its unprecedented precision (down to the most minute details reflected in the background mirror), The Arnolfini Portrait is one of the most famous and beloved paintings of all time. The Ghent Altarpiece is itself a milestone in the history of art; in it, for the first time, pictorial conventions of the Middle Ages were replaced by a visual language that is still current today. In his religious paintings in particular, Jan van Eyck's ground-breaking realism is married with a symbolism that allowed the artist to illustrate even the most complex theological concepts in a highly accessible way.This volume explores van Eyck's complete life and work in large-scale illustrations - featuring many enlarged details - setting the cultural and historical scene for the revolutionary painting and life story of this enigmatic artist. The result is a richly faceted panorama that looks not just at the content and artistic interpretation of van Eyck's paintings, but also at the patrons who commissioned them and the original functions they were designed to fulfill. Analysis also extends to the production of his assistants, whose workshop paintings are here presented to a broader public for the first time. This comprehensive tome is rounded off by a catalogue raisonne of all the currently known works by Jan van Eyck and his workshop, together with a detailed inventory of lost works which has been reconstructed on the basis of the literature or later copies.