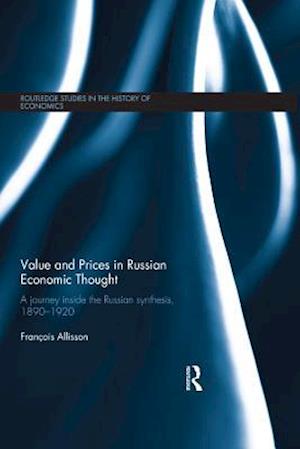 This book explores Russian synthesis that occurred in Russian economic thought between 1890 and 1920. This includes all the attempts at synthesis between classical political economy and marginalism; the labour theory of value and marginal utility; and value and prices. The various ways in which Russian economists have approached these issues have generally been addressed in a piecemeal fashion in history of economic thought literature. This book returns to the primary sources in the Russian language, translating many into English for the first time, and offers the first comprehensive history of the Russian synthesis.The book first examines the origins of the Russian synthesis by determining the condition of reception in Russia of the various theories of value involved: the classical theories of value of Ricardo and Marx on one side; the marginalist theories of prices of Menger, Walras and Jevons on the other. It then reconstructs the three generations of the Russian synthesis: the first (Tugan-Baranovsky), the second, the mathematicians (Dmitriev, Bortkiewicz, Shaposhnikov, Slutsky, etc.) and the last (Yurovsky), with an emphasis on Tugan-Baranovsky's initial impetus.This volume is suitable for those studying economic theory and philosophy as well as those interested in the history of economic thought.