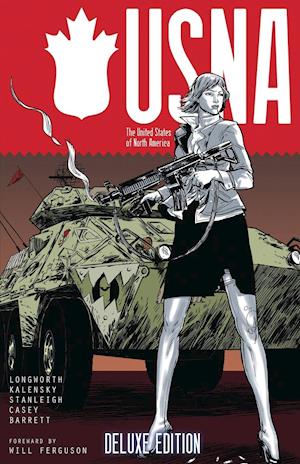 A time in the not-too-distant future when Canada and the United States are now amalgamated into one country: The United States of North America. In the beginning, there was great hope that a better life would result from this union. For many of the citizens of this new country, life has become far worse. There are ongoing wars in Central America. Young people are unhappy as compulsory conscription has been re-established. Food shortages, a result of climate change, create havoc. Family farms have been lost, replaced by huge prison farms. There is disappointment and unrest amongst the people. USNA is the story of a rebellion in North America lead by a former Canadian Prime Minister. It is not so much a desire to return to a two country system as it is a movement towards restoring our common community values and freedoms.

USNA: The United States of North America - Deluxe Edition is the first of a dynamic two volume, graphic novel series. The second book in the series, USNA II - Deluxe Edition, continues and concludes the story.

USNA: The United States of North America - Deluxe Edition includes a new prequel story which tells the tale of the political intrigue that led to the amalgamation of the United States and Canada. This graphic novel also includes a Foreword by Giller Prize winning author Will Ferguson.